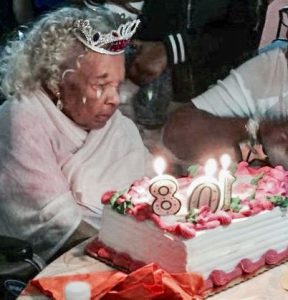 Just because Mary Gibson of Jersey City has turned 108 years old doesn’t mean her mind isn’t as sharp as it once was. If you talk to family members, it’s actually become sharper.

Gibson, a longtime resident of Jersey City, celebrated her 108 birthday at a family member’s house in West Orange on June 3. According to Gibson’s granddaughter, Valerie Slack, approximately 25 people attended the birthday party, which was filled with singing, cake eating, and embracing Gibson.

“The party was beautiful” said Slack. “At one point we all formed a circle around her and we each made a comment about her and wished her well with her age. It was great.”

Gibson, who currently resides at the Peace Care St. Joseph’s Facility in Jersey City, was born in Clio, S.C. She moved to Jersey City with her family when she was a teenager and has lived there since.

Slack says that age is not slowing her grandmother down, and that she thinks Gibson is actually becoming “sharper” in the mind as she gets older.

“Me and all of our family are amazed at her. She always asks us what’s planned next and she always comes and visits us from the care facility” said Slack. “I think age is actually helping her. She reminds us of things that we completely forget about and it’s just incredible to see.”

Article Covered by NJ.com
BY LORENZO GAZZOLA
The Jersey Journal