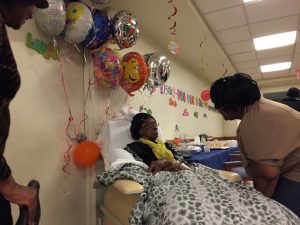 “She’s been a great godmother… just really wonderful,” said Lisa Arlene Duffie, 55, as she recalled fond memories of her godmother – particularly from Easter.

And that’s just her biological family. Pierce was also a licensed day care provider, serving as a surrogate mother for an uncountable number of children and families, according to her daughter Linda Stokes-Crite.

Pierce has lived in Jersey City since 1932, when she relocated to the Booker T, Washington housing complex. Seventy-three years later she set a record for being the oldest and last original resident of the complex.

And she certainly made her mark in her community. She has been a member of countless organizations, and has received many awards, including one from the Afro American Industrial Women’s Club for outstanding community work in 1980.

“She is loved by many,” Duffie said.