There are many words that could be used to describe Sr. Kristin of the Sisters of St. Joseph of Peace: passionate, driven, fearless, and tireless. Those descriptors however don’t scratch the surface of this social justice advocate devoted to God and society’s forgotten and disadvantaged, especially women and children.

Sr. Kristin’s fight for justice began during the 1960s while she was completing a sociology degree from St. Peters University. During that era, many focused their efforts to protest the Vietnam War. Already conscious of the plight of the disadvantaged, Sr. Kristin’s focused on St. Peters’ treatment of its cafeteria workers as well as academic freedoms. 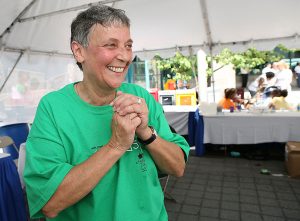 The Congregation of the Sisters of St. Joseph of Peace welcomed Sr. Kristin in 1966. During her first years of ministry, Sr. Kristin served as a social worker. In 1974, she received a Masters in Social Work from Fordham University.

A departure from social work occurred when Sr. Kristin was given the opportunity to act as general contractor for the construction of York Street Project, a non-profit committed to struggling women and their children. Sr. Kristin met the challenge with the same vigor she approached any new project. Donning a hard hat, everyday she oversaw the work-site, construction crews and architects. Ultimately, Sr. Kristin was appointed as the executive director of York Street.

In her last years, Sr. Kristin’s time was given to Congregation Leadership, a position she was devoted to. Speaking with another sister about the years following her leadership role, Sr. Kristin said she had so much left to do in the world. Tragically, she was unable fulfill that wish when diagnosed with stage IV lung cancer.

Even in death, Sr. Kristin’s light lives within all who knew her. The legacy she leaves behind eternally burns.